Andreas Wittmann (born 1975) studied from 1995 Safety Engineering at the Bergische Universität Wuppertal with a focus on workplace safety. 2005 Promotion followed Dr.-Ing., Which he has developed through his work as a research assistant at the Department of Work Safety, Physiology and Infection Control at the University of Wuppertal. Several other universities use his special skills in the context of teaching assignments. In 2010 he was appointed Junior Professor for Technical Infection Protection. 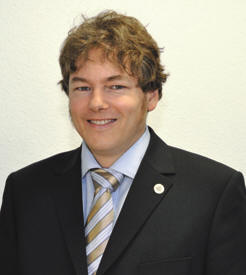 MM: Dear Prof. Wittmann, how does an engineer whose focus is working safety and who also teaches at a German university, become concerned so intensely with the NSU trial of all things?

Prof. Wittmann: I’ve always been very interested in politics, our legal system and the role of the media. Of course, I was shocked in the beginning by the abysses which opened after the events in Eisenach and Zwickau after the surprising exposure of the so-called NSU. But these incredible revelations in my opinion came much too fast, many inconsistencies occurred and they are increasing daily. The idea that heavily armed criminals spontaneously take their lives in the view of two patrol officers, instead of fighting and then also carry evidence of the perpetration of all unsolved crimes since the Flood with them, this is not credible.

MM: And what do you think about these inconsistencies?

Prof. Wittmann: I exchanged views about these inconsistencies with a lot of other interested parties. End of June a fellow blogger („fatalist“) obtained the leaked investigation files for the trial in Munich, which the „working group NSU“ is now analysing since several months. Various people of different political orientations who put all of their knowledge and commitment in the analysis of documents and the comparison of the file contents and compare it with the reality in the Munich trial and the media reports involved. All are united by their civic commitment to the rule of law. From the present, certainly authentic files we can clearly see in many details that the story did not happen like it is perceived in the media and in public at this time. Furthermore, the records clearly show evidence of counterfeiting by employees of German authorities. And this exactly happens in such a sensitive, accurately observed by the international public trial. Unfortunately, the press is still silent too.

MM: You have sent a letter to the Federal Minister of the Interior on the so-called Česká paradox. What does this mean?

Prof. Wittmann: The letter was sent by the members of the working group to the Home Affairs Committee of the German Bundestag (part of Legislature), not to the Minister of the Interior (Executive). The letter concerns inter alia the alleged murder weapon Česká that plays a major role in the NSU trial. The Česká paradox is that a weapon on which the technical examination only started in the morning of 11/11/2011 by experts of the BKA, cannot be tested, tried and proclaimed the unique murder weapon in 9 cases the very same morning by the head of the BKA Ziercke:

It either has been announced unaudited, that the Česká found in Zwickau was the murder weapon, or the authorities knew, possibly even before the discovery on 9/11/2011, that it is the murder weapon. Or is it just not the murder weapon, although this is claimed to this day. The accessible reports of the BKA are much more cautious than the federal prosecutor in the trial. Moreover, it was our letter that got many balls rolling now.

MM: It is hard to believe that the minister has his office respond substantially, but what effect have these facts on the proceedings of the trial?

Prof. Wittmann: After all Mr. Bosbach, chairman of the Interior Committee of the German Bundestag, responded meanwhile. The Committee on Internal Affairs now wants to consult the court documents in order to check whether the inconsistencies ​​detected by our working group also arise from the „original files“. But this is to assume, because nobody has claimed yet that the leaked documents were forged, for which there is also no indication. But we can only give impetus to point out inconsistencies – our role is not in law enforcement, for this other protagonists are provided and required. Well, I think this has no effect on the course of the trial for now. It will initially be ignored by prosecution, co-plaintiff, defense and justice. But why?

MM: Is there any other evidence for your skepticism regarding the NSU trial?

Prof. Wittmann: I and the entire working group abhor these acts and would like to see those responsible brought before court, of course. Inspite of more than 150 days of trial, no viable evidence was presented, which proves that the deceased Böhnhardt and Mundlos were really involved in the accused deeds – at least 10 murders, multiple bomb attacks and several bank robberies. Skepticism, however, in my view is still a strong understatement, because so far all physical evidence (DNA, fingerprints, video recordings) of weapons and crime scenes exonerate the dead and the main culprit. But apparently this does not matter in the trial.

MM: Is it even conceivable that not Böhnhardt and Mundlos have committed the murders, but completely different people, who are to be covered here?

Prof. Wittmann: Neither the trial, which is lasting for 150 days now, nor the investigation files produce clear evidence for the 10 murders allegedly committed by Mundlos and Böhnhardt. Examples for this are lacking DNA evidence at the respective crime scenes, objects and weapons (although on the latter DNA was found, on both of the murder weapon of Heilbronn in Zwickau, as well as on the alleged bank robbery weapons Arnstadt and Eisenach in the motorhome, yet no Uwe DNA but foreign DNA, which is still undetermined), conflicting witness statements along with phantom images that have no match with the look of Böhnhardt and Mundlos, not to forget. There is not a single, even close to „hard evidence“ for the alleged perpetrator. Neither in the homicides, nor in the two bombings in Cologne, or for the alleged bank robberies: More than 4300 DNA evidence from the files do not match the Uwes.

MM: How do you explain that the media, who otherwiese plunge onto scandalous news with much pleasure and partially in a sensational way, are so reticent in the case of inconsistencies in the NSU trial?

Prof. Wittmann: This is inexplicable to me, as well, so far. After all, our results are now perceived by smaller independent publishers and media, which in turn take up and publish one or the other topic. We will reach a point in the future, at which the mass media will have to deal with the new state of evidence that we create with our research. We suspect some kind of raison d’etat, which leads to the strange „pussyfooting“ of the media noted by you.

We must also see that there is a political constellation here that has to do with the placement of NSU history. In 2011 serious European policy decisions were pending, on which German interests were not allowed to be articulated. At the same time parties who wanted to attach to those interests were formed. Then the „national damper“ NSU was just right in time. As with the classic „strategy of tension“, that NATO has expanded for decades over Europe, thus even the minorities could be upset: Those Muslims who had become self-conscious Germans could again be pushed in the politically desired „victim role“, sowing discord between the population groups. Thus, the establishment definitely benefitted from the „right-wing terrorism“.

MM: What do you think was the motive behind certain sources providing you with otherwise hardly accessible files?

Prof. Wittmann: The motivation may have been only the urge for „truth and justice“. For this first step you can only be grateful …

MM: Let’s say there is some kind of conspiracy by whomever, how is it then to explain that inconsistancies, which you have discovered by simple inspection of the files, were not noticed by anyone before, neither the police, nor the prosecution or the state, nor the defense. They eventually can’t all share the same objectives?

Prof. Wittmann: An interesting question, which I would like to direct towards the administrative bodies specified by you, at a future date. I can only assume that these bodies may be pursuing the same goal, namely the condemnation of Beate Zschäpe; however, the reasons for this may basically be differing.

Especially the role of the defense is to be scrutinise here, for the „silence strategy“ accommodates the cementing of an unproven „NSU-narrative“ and does not work to the advantage of the accused Zschäpe and Wohlleben: Both are still in detention, although there is currently no single hard evidence . Several things are gathering momentum right now, specifically regarding the origin of the 9-fold alleged murder weapon Česká 83 with silencer. There is hardly anything clarified, a scandal within the scandal, because these things would have to have to have been clarified since the beginning of the BKA investigations in Switzerland in May 2004.

MM: If someone discovers more inconsistencies, whom can they contact or which blogs are you recommending that are trying to raise awareness with a serious approach?

Prof. Wittmann: The working group NSU created a blog (wer-nicht-fragt-bleibt-dumm.blogspot.de/ – DELETED YESTERDAY) and a forum (nsu-leaks.freeforums.net), in which everyone can help to provide further efforts to throw light on this scandal, in which you can publish your observation and assessment of the case. Anyone can contact us, whether on the internet, by post or whatever.

MM: Prof. Wittmann, thank you for the interview.